Ever go to conference? Ever notice that people return to the same seat after breaks. If it is two day conference, everyone will be sitting in the seats they had the day before.  We are creatures of habit and we like routine. One certainty we love the most is getting that pay cheque every month. Our spending habits revolve around the day we get paid and our direct debits are set for just after that money is lodged into our account.

That regular pay cheque used to continue into retirement. The only option available was to purchase an annuity from an insurance company. They would in effect pay you a salary and you knew how much you would receive for the rest of your life. In 1999, the ARF was introduced for personal pensions and 20% Directors. In 2011, it was opened to everyone with a defined contribution pension. Everything has changed now and no one purchases an annuity anymore.

There goes the certainty

While you can take a fixed income from an ARF, most retirees don’t. The main reason is that it increases the risk of your fund running out of money. Most take their income as a percentage of the value of the fund. In fact,  most take the minimum of 4% or 5% (if age 71 or older). With an annuity, the insurance company bears the investment risk. But with an ARF, that risk is shifted to the policyholder. Spend too much or invest badly and you can run out of money too early.

When we talk about long term returns, we look at the average annualised return over a specific period. The annualised return of the Managed Balance fund over the last ten years is 6.42% per annum. Our mind automatically thinks of the fund growing by 6.42% each year. We all love the straight line image in our head. 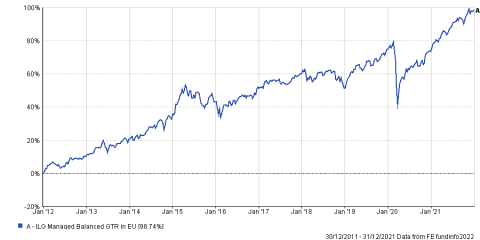 But that is not how it works. The table below shows the actual returns from the ten years that were used in calculating the 6.42% annualised returns. 2018 saw a negative return and you just about had a positive return from 2020 after Covid hit the world.

What does that do to my pay cheque?

For a start, the last ten years have been great for investors and a retiree would have seen a €1 million ARF increase to €1.321 million. And that is after taking out 4% each year. We can see from the table below that there is a variance in the income received. This retiree would have received €10,000 more in 2021 than they received in 2012. That’s the power of compounding for you! They would have also received almost €5,000 less in 2018 than they did the previous year. That will means years you have too much money and years when you don’t have enough.

Your expenditure isn’t a constant either

When you retire, you are more likely to spend more money in the first few years than you will later. The car will be replaced, a few quid given to the kids, more holidays, a few home improvements. As you get older, your expenditure will also change. Less will go on travel and more will go on home and medical expenses. Generally your costs will go down. So like your income it will be variable from year to year.

This is an adjustment that most retirees adapt to well and they are prudent with their spending. Keeping some of their tax free lump sum or other cash savings to supplement their ARF income always helps.

But if you want that certainty of income in retirement, an annuity is the one for you.