It is easy to get used to this upside and find it hard to accept the downside. No one likes seeing their money fall in value. And as it has grown over the years, the actual loss just gets bigger. A 10% loss on my initial €100,000 investment is now costing me €37,159. I still have €334,428 from my initial investment of €100,000 but I am still counting my loss and not looking at the gain.

We are currently going through what is called a market correction. That is, a decline of 10% or more in the markets from its peak over the previous 52 weeks. A correction may last days, weeks, months or even longer. The average correction tends to last between three to four months. That means we are only at the beginning and have a while to go.

Corrections are a part of investing. It is something that can always happen but we do not know when they will occur or how long they will last. That is what makes them scary, especially for inexperienced investors. There are lots of new investors who, looking for a return, took money off deposit

If you decided last year to look for a return from those savings sitting on deposits, you would have asked yourself why you didn’t do it sooner. Now with these falls, you now know why.

While markets can and probably will fall further, lets put this into context. Below is a returns graph for the Vanguard Global Stock Index fund. This is the equity fund that we use the most for clients money. The fund has been open since September 1998, so it has been two major recessions; the dotcom and the credit crunch. That little blip on the right hand side of the chart beside the A is what we are currently going through. Of course, it could go down further but in the context of the last 23 years, it is tiny.

And the average return of the fund since inception? 6.67% 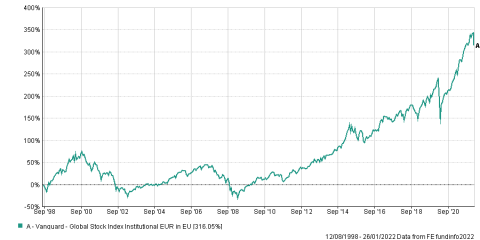 Getting that 6.67% average return meant that the 14% 10 year average return also had to have periods of negative growth like we had in two recessions.