A walk down memory lane

What a few weeks it has been. We have gone from exuberance over great stock market returns in 2019 to bulk buying toilet rolls and pasta. Leo Varadkar announced that all schools will be closed and I can see the queues of cars with people wanting to go to Dunnes Stores. Why do we need to stock pile food and toilet roll?

We are afraid of the unknown. The coronavirus is dominating our everyday lives. But we don’t have any past examples where sporting events are suspended, schools are closed, public gatherings are restricted. At this time, Saudi Arabia also decided to trigger an oil price war which has lead to a slump in energy stocks. What we have seen is a -21% decline in the global stock market in just 3 weeks.

When we advise clients on making investments, we always talk about the next downturn because we know that there is going to be one. The problem is, when you talk about what happened in the past, it’s with 20-20 vision. We can see how far the market fell and how long it took to recover. The future crash that we talk about it unknown and we don’t know when it will be. Well, we do now, it’s a global pandemic called Covid 19.

Governments and central banks are trying to help. The Federal Reserve and Bank of England have already reduced interest rates with other central banks around the world likely to follow. Other forms of supportive monetary policy are also being rolled out into the financial system in order to ensure liquidity.

Let’s look back a bit

When it comes to making investment decisions, we have to ask ourselves whether this pandemic is going to change our way of life forever or is it something that will eventually subside and our way of life will return back to normal? While we don’t know what the future will hold, we can have a look at what has happened over the last number of crashes.

If you bought at the very peak of the market in 2007, it took 5 years for the crash to stop and for your investment to make back it’s losses. That is why we generally start talking to investors 5 years from their intended end point about whether they want to reduce the risk of their investment. If you are further out from that, you should give this current crisis some more time, even if that means seeing your money falling into negative territory. If you had invested at the peak in 2007 and stayed invested all the way to today, you money would have grown by 95% over that period. 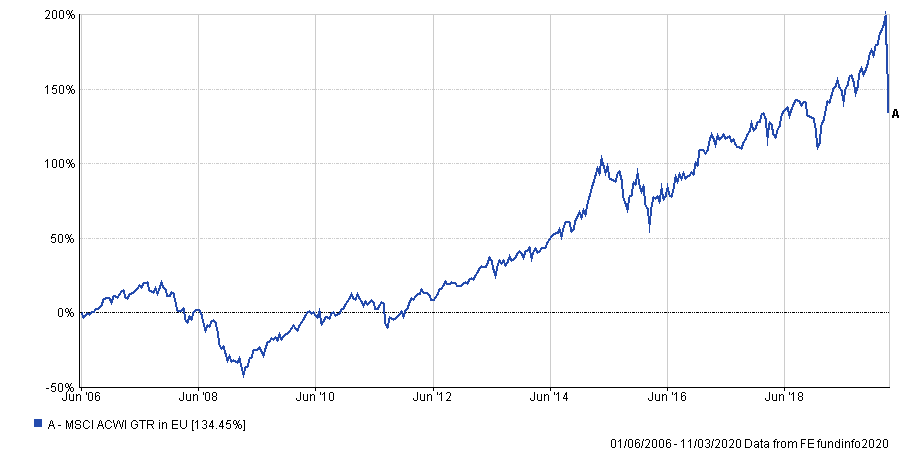 The worst investment period for an investor is someone who invested in 2000. The dot com bubble burst, creating a massive market crash. Then September 11 happened, causing a huge loss of confidence in the US. As the markets recovered after this, the financial crisis happened, wiping out any recovering and plunging the world into a recession. It took 13 years for an investor who bought at the peak in 2000 to make their money back. If they stayed invested to today, they would be up 77.5% over 20 years. 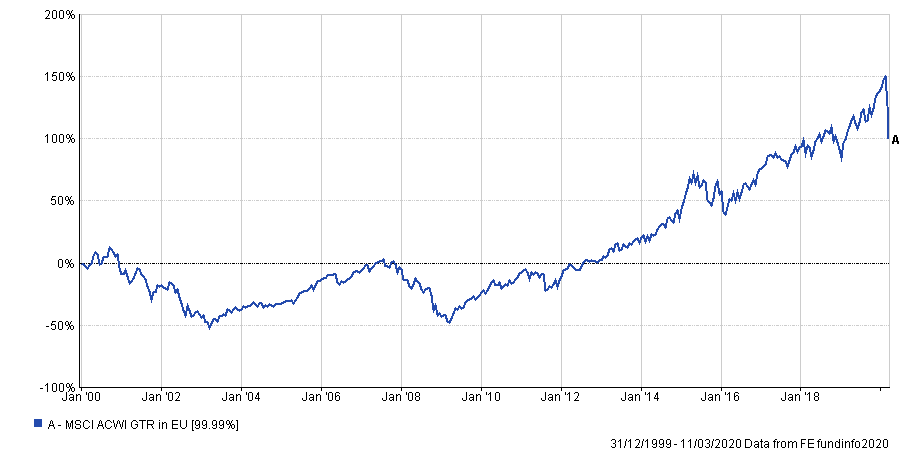 What about the investor who thinks really long term? The long term investor lived through the dot com bubble, September 11, the credit crunch and the current crisis. How did they do? Someone who invested in a global basket of stocks and shares in January 1988 would be up 1,067% today. That would mean an investment of €100,000 would be worth €1,067,000. This shows that giving your investment time, the less the impact of these big crashes have on your money. 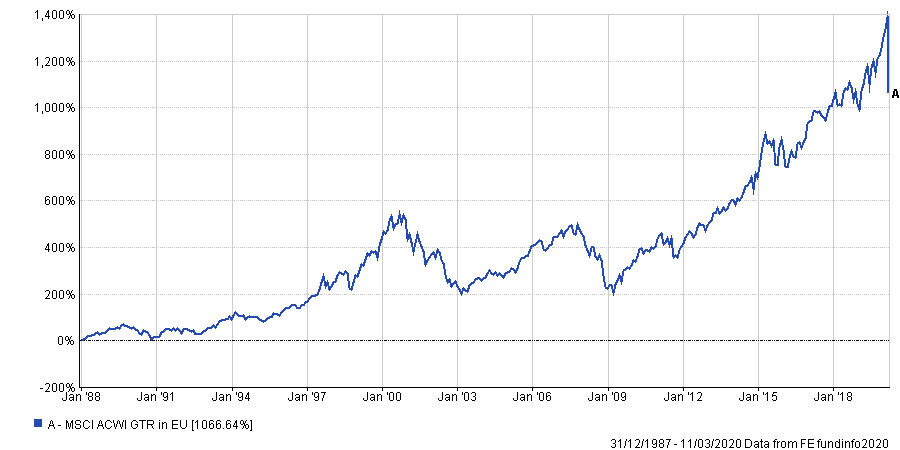 Well managed, financially sound companies will find a way through this period of uncertainty, but as has happened previously, more vulnerable business models will be exposed and won’t make it. In particular, those that need to borrow to pay the daily bills or are simply past their sell by date. Flybe won’t be the last to go bankrupt and it won’t be a complete surprise if a few frauds surfaces.

If there is a silver lining to all of this, it is that the decks are being cleared for the future, with badly managed companies suffering with well governed companies coming through this downturn. That is why we always focus on investing in quality companies.

If you have any concerns about your investments, just give me a call or drop me an email at steven@bluewaterfp.ie