Commodities are not the answer

Russia produces about 10% of the world’s oil. They are also the world’s second biggest producer of gas and supply and they produce 30% of Europe’s gas. One of the economic consequences of Russia invading Ukraine is a sharp increases in the price of energy (this is nothing compared to what the Ukrainian people have suffered). The spike in fuel costs has been so big that the Irish government has reduced the amount of excise duty that they collect in fuel. Even still, a litre of diesel was €2 per litre when I passed a petrol station this morning.

From bad to worse

From an investor point of view, 2022 had already gotten off to a bad start. The stock market had begun its decent with tech stocks being hit hard with inflationary news and the US Fed’s intention to increase interest rates. Since Russia invaded Ukraine, European stocks have tumbled, with $6.7 billion pulled in European stocks in one week and the selling continuing. Some say Europe is in recession already and there is a fear of stagflation. That is a recession and high inflation at the same time. If the ECB increase rates to slow inflation, they will only slow the economy and make the recession worse.

With share prices falling and the value of people’s pensions and investments impacted, people are looking for somewhere to make money. With oil and wheat are in huge demand, commodities is where the money is made. At Bluewater, we don’t include commodities in any investment portfolios. The reason is simple, it doesn’t make a return when you own it. You buy it at one price and sell it at another but in the interim you don’t earn anything. With other asset classes, you get interest, rent or a dividend; if you own the asset long enough, it will pay for itself. Not with commodities.

A broken clock is right two times a day

The main commodity index is the Bloomberg Commodity Index.  It is up 39.51% over the last 6 months while the MSCI World Index is down -2.35% over the same period. The last year has been a good time for commodities as the production increased as we came out of covid and now we have the war in Ukraine. But if we look over a longer time period, the Bloomberg Commodities returned 0.89% per annum over the last 10 years. Over the same period, the Bloomberg World Government Bond 1-5 Years returned 1.25% per annum and the MSCI World Index returned 12.78% per annum.

In fact, if you go back to when the index opened in February 1992, the commodity index has returned 4.03% per annum compared to 8.81% in equities and 3.87% in bonds. What does this mean in real money? €100 invested in February 1992, would return the commodity investor €328.57. The bond investor would have €313.71 and the equity investor would have €1,270.99 When we look at the risk commodities are exposed to, they are similar to equities but the returns are similar to bonds. That is not a good investment strategy. 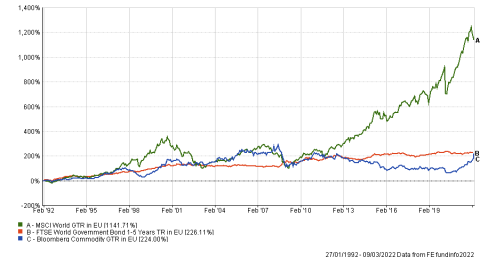 Commodities may be in vogue at the moment but will they provide you with long term growth equal to the risk you are taking? Unlikely. So stick to your long term investment strategy and accept volatility as a part of the investment journey. Jumping in and out of the current best thing will only result in you losing money.