When we think about investment returns, we think of long term averages. It doesn’t work like that though with returns varying from year to year. If you are assuming a 6% annualised return, there will be years of double digit returns but also years of negative returns.

This is fine when contributing to your pension. While it means your pension fund has fallen in value, you are also buying at lower prices you have time for the market to recover.

When it comes to retirement, major falls in the market at the beginning of retirement can have a big impact on the long term value of your fund. Because this time, when markets are falling, you are not buying low; you are selling low.

It can also work with positive returns, that you retire when markets are doing really well and your ARF has very good returns in the initial years. It is as likely that your ARF will grow by a multiple of 6 than it is to run out but no one gives out about making too much money. So I am going to look at those who retire into bear markets and run the risk of running out of money.

In this article, I am looking at a retiree who has an ARF of €1.5 million and an investment portfolio of 60% equities, 40% bonds.

Whether you suffer from negative sequence risk is usually down to bad luck more than anything else. Most people don’t have a choice on when they have to start drawing down their pension benefits. 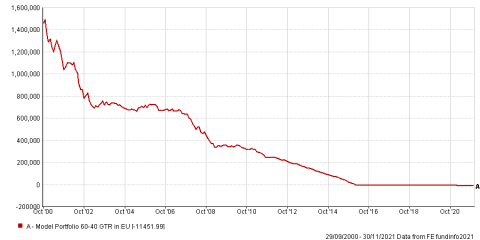 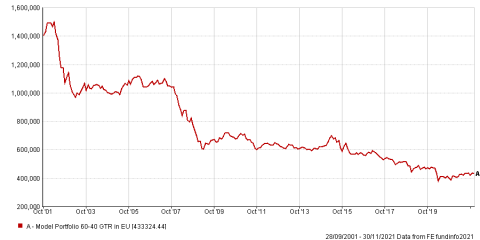 Even better would be if you had retired two years earlier in September 1998, you would still have €1.23 million today. 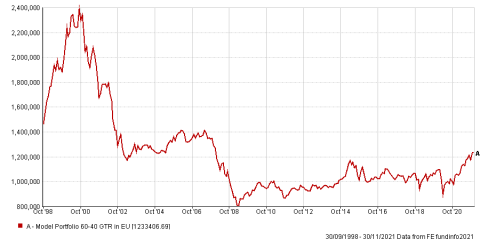 What can you do to protect yourself against negative sequence risk?

Research have looked at how much you can take out of your portfolio each year on an inflation adjusted basis and the money last you for 30 years. That magic number is 4%. Going back to 1871, in all scenarios, someone who withdrew 4% a year would have been able to maintain that level of income no matter what the economic environment. The closest was someone who retired in 1966 and that is despite a 30 year annualised return of 9.56%!

In our example of someone retiring in September 2000, taking out 4% each year would see you having €1.37 million in your fund today. 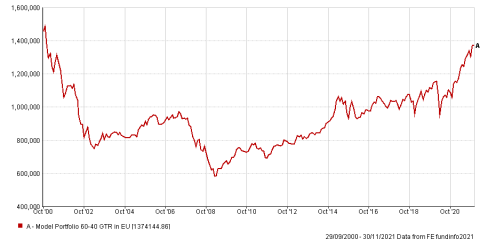 Take income as a percentage of fund value

When people are planning for retirement, they like to think of a fixed amount of income, just like their salary. You can get this through purchasing an annuity, but with rates so low, people don’t buy annuities these days. But taking your retirement income as a fixed amount can be detrimental to the long term survival of your ARF. In bad years, the fixed income becomes a larger percentage of the ARF value.

By taking an income as a percentage, you get more when markets do well and less when markets are down. This constant adjustment of income is self regulating your withdrawal rates. The chart below shows the return of someone who retired in September 2000 and took out 5% per annum. At the lowest point in 2008-09, regular income would have gone down to €2,223 a month (compared to €6,250 for those on a fixed income) but this retiree still has €1.1 million in their ARF. 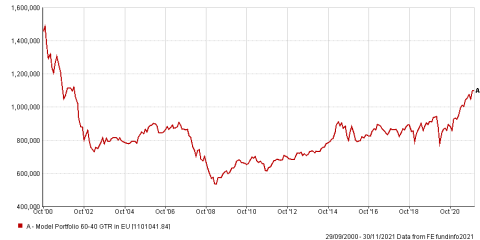 The vast majority of ARF investors take income as a percentage of fund value. In fact, most take the minimum imputed distribution amount of 4%, increasing to 5% from age 71.

Rebalancing your portfolio after the distribution is made each year back to the original asset allocation. The effect of this is buying equities when the markets are down so they can benefit from rebounds in the future. This is important because if you start retirement in a bear market, the value of your equities will be depleted and as they are not replenished you will eventually use up all equities and bond returns will not be enough to sustain withdrawals in the long term. Buying equities throughout the bear market at lower prices protects against this.

Reaching retirement and giving up the monthly pay cheque is a big enough event without having to deal with a bear market. But manage your withdrawals sensibly and you’ll be able to make your retirement fund last.